Skip to content
Loading...
AboutObakeng2019-12-06T09:54:54+02:00
Living through the rollercoaster of the emotions of infertility for five years, to fall pregnant via in vitro fertility treatment with twins that were born prematurely (at 27 weeks) and the loss of my son two days after birth expanded my world beyond understanding.
Experiencing premature birth (one twin natural and the second twin via a classical C-section), the loss of an infant, and having to cope with a tiny person in Neo-natal ICU for 71 days I realised how little I knew about NICUs, premature birth and tiny babies.
Although I have a wonderful network of family and friends I found that the support for those having to deal with a premature baby is limited in South Africa, and for that reason I decided to do something about it.
Projects 4 Preemies is a registered non-profit company (NPC).
Our mission is to inspire, encourage and support families affected by preterm birth with the aim to make a difference in the lives of those fighting for premature babies.”
Supporting our mission is our three objectives of awareness, support and education. 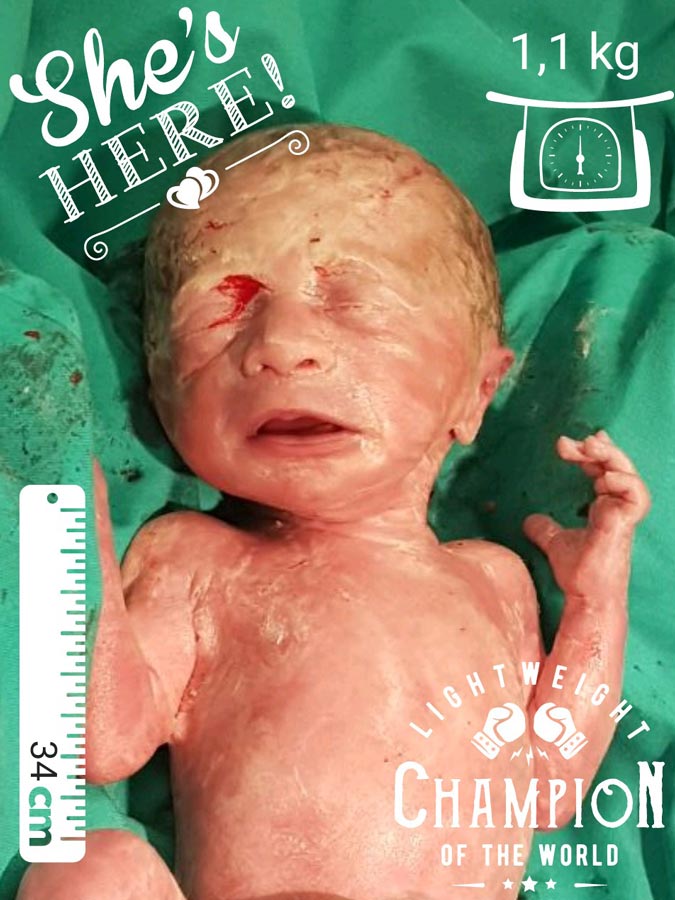 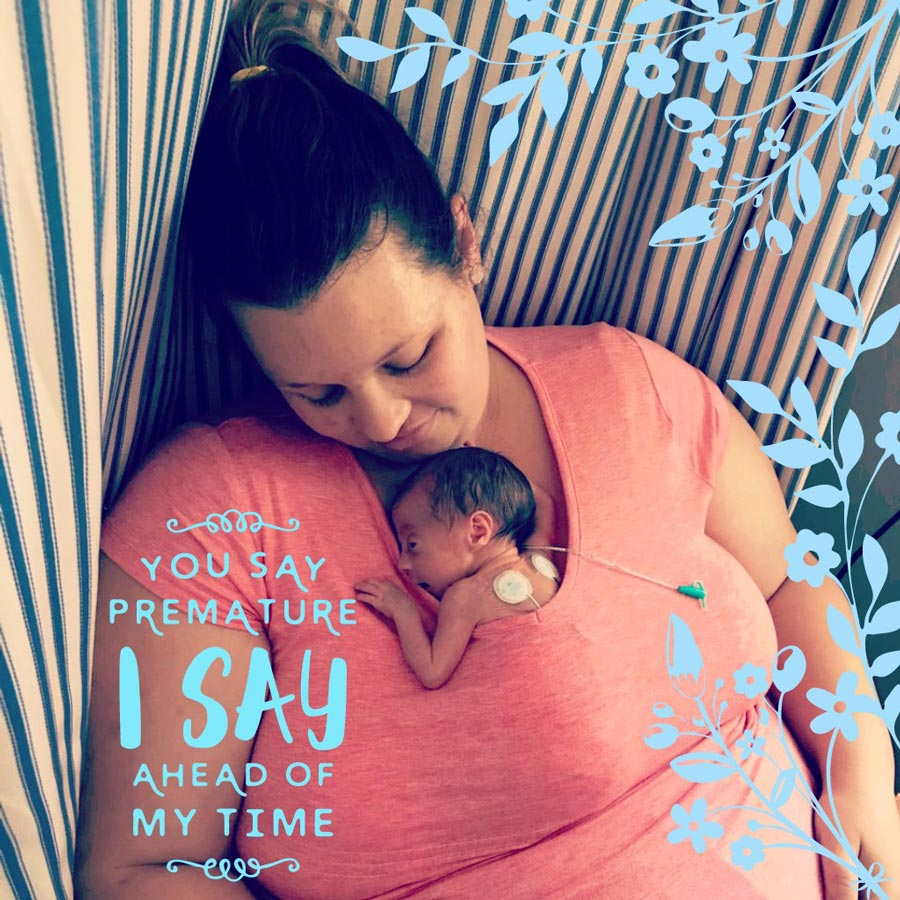 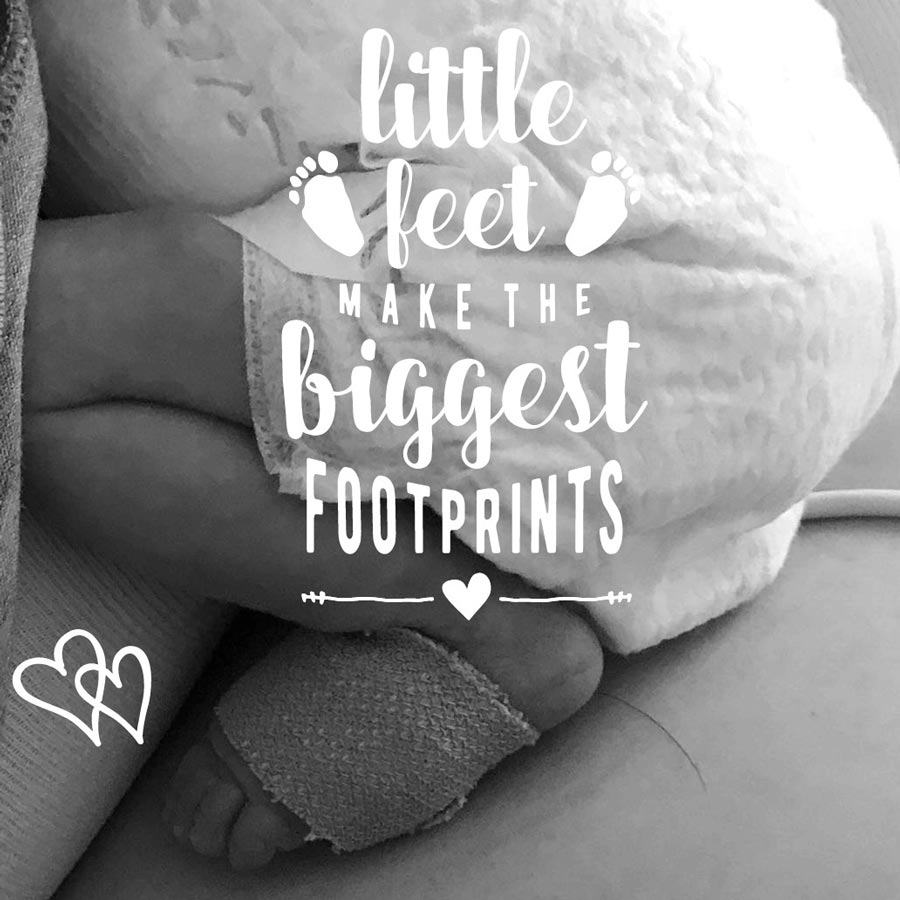 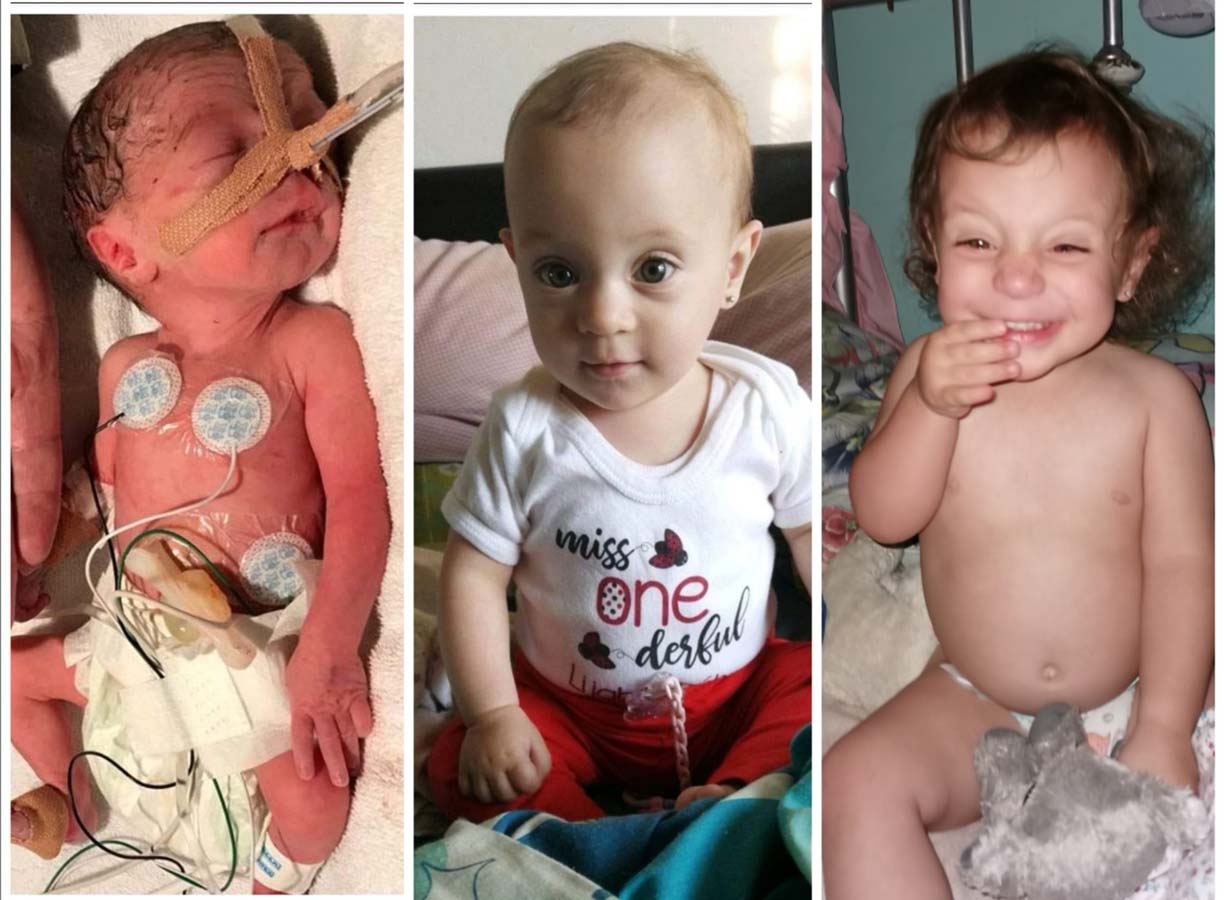 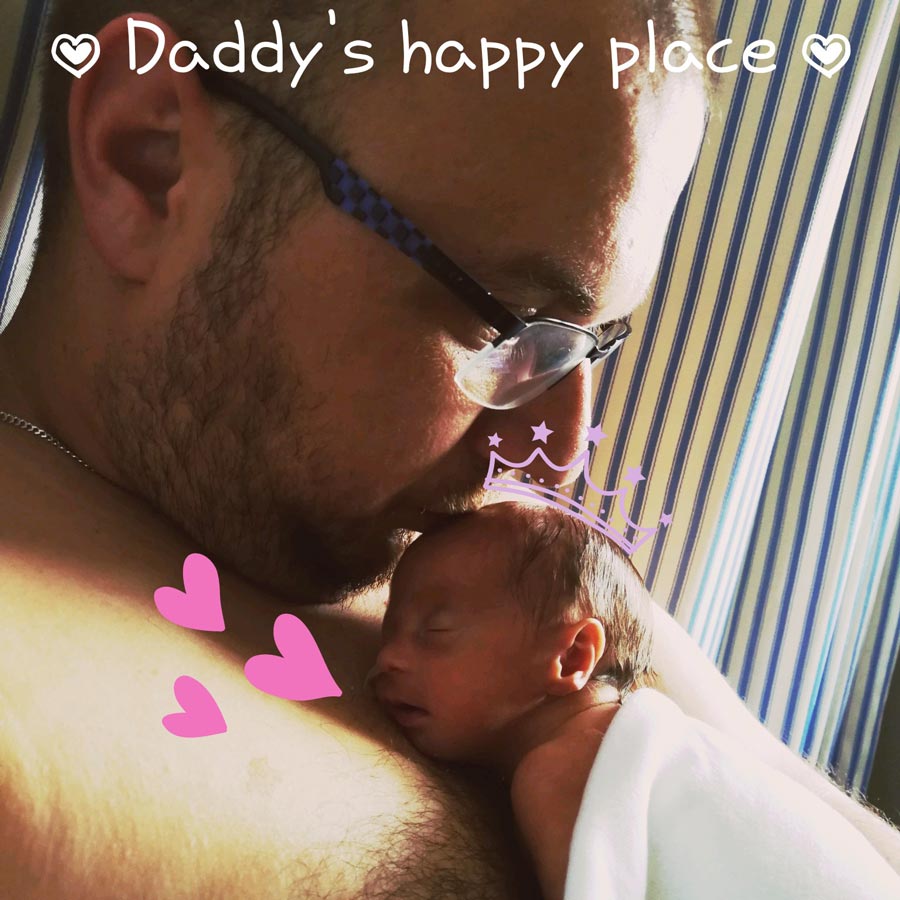 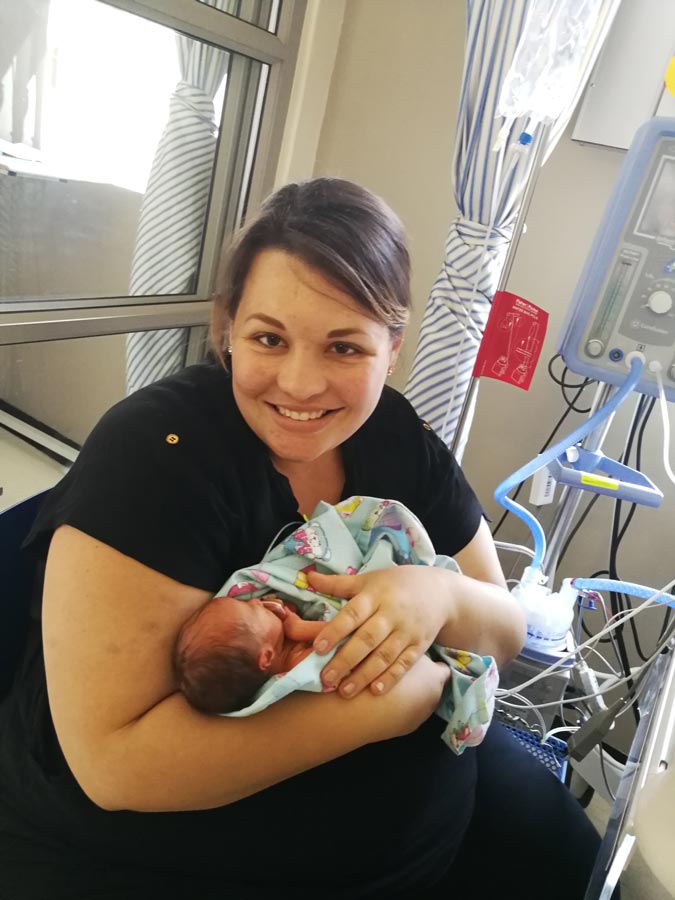 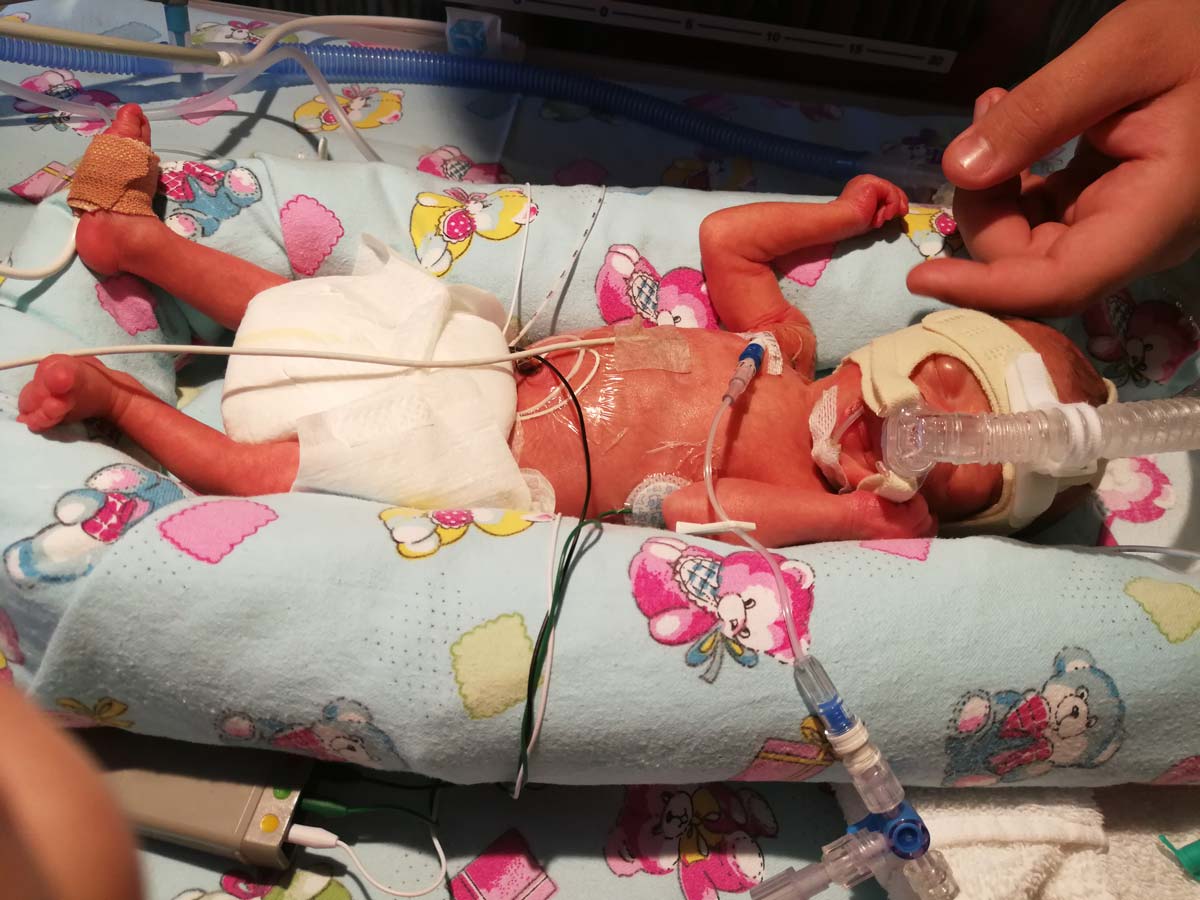 I was five weeks along when we found out that I was pregnant. We were excited beyond belief! I had a normal, healthy pregnancy, until 28 weeks. I was admitted to hospital with my blood pressure at 211/178 and was diagnosed with pre-eclampsia. My gynecologist advised me to prepare for a premature baby, that I should expect my little one no later than 34 weeks. But the bun had to come out of the oven at 31 weeks when my pre-eclampsia suddenly turned into HELLP-syndrome.
I emailed my gynae early one Sunday morning after experiencing three nights of excruciating upper back pain and no sleeping. I was planning on phoning her the Monday morning, but my husband insisted on contacting her immediately. She asked me to go to the maternity ward, just to have everything checked out and make sure that baby wasn’t in distress.

All seemed fine and the decision was made to admit me so I could receive a muscle relaxant via drip. As my husband was passing the nurse’s station on his way out, sister Khanyi asked him to go back, she was coming to talk to us. I felt the blood drain from my face, and went ice cold as she said: “The final results came back, you have HELLP-syndrome. You are scheduled for an emergency C-section at seven thirty”. My first thought was that mothers and babies die from HELLP-syndrome, as one of the hospital personnel said a year later as she recognised me: “You are the one we had to fetch from the gates of heaven.” My second thought was, ok, I have about twelve hours to get used to the idea that my baby girl will be born in a much different way than I had planned and dreamed. That little thought bubble was burst when sister Khanyi said that she in fact meant 19h30 that night, the team was on their way, I had forty-five minutes before going into theatre.

Everyone we had just called to let know that everything was fine, I was just admitted for the muscle relaxant, was phoned again and asked to come, the first granddaughter of the family was on her way and fast. I am sure speed limits were broken as it took the family less than half to complete a journey of almost an hour.

And so, at 20:08 on 3 September 2017, Lijah-Rynéh was born. 34cm head to toe and weighing just 1.15kg. I heard her cry and then she was rushed to the NICU to be put on oxygen. I only got to see my daughter for the first time twelve hours after she was born, was only allowed to hold her four days later. Luckily, I had received the steroid injection for her lungs at 28 weeks, so she spent only four days on oxygen before she could breathe room air.

We spent six weeks in the NICU. She was a healthy premature baby. She needed no transfusions, no antibiotics beyond the norm and she never had jaundice. I was privileged enough to be able to express breastmilk from the start, her feeds starting at 1ml every 3 hours. Still the NICU was daunting and traumatic. She had to get a central line for some medicine that was meant to help her gain weight. The pediatric surgeon told me that even though this was standard procedure, things still could go wrong because veins that tiny are not that easy to get into. She pulled out her central line three times. The last time the line was placed in a vein in her tiny little head. After the third time she pulled it out though, she had gained enough weight for it not to have to be replaced.

For six weeks I sat with my baby on my chest, kangaroo mother care (KMC) as prescribed by our pediatrician. I would sit with her from eight until twelve, then I would have to leave because it was quiet time in the NICU. I would go express milk, have lunch, catch a quick nap in the maternity ward’s waiting room, express milk again and be back with my little one on my chest from three to six. It was like watching a flower unfold into full bloom, seeing a miracle happening in front of my very own eyes.

Six weeks after she was born, we got to bring her home, the day before my birthday. The NICU was a life-changing experience. We’ve made friends who understand our journey like no others do, we prayed together, celebrated together and mourned together. The nurses of the NICU remember our babies by name and are always happy to see us visit. They loved our babies as if their own.

Today my premature baby is a feisty two-year-old toddler who still fits into some of her six to twelve month clothing, though there is nothing six to twelve months about her attitude. We are grateful for all the support we received during our time in the NICU from friends, family and medical staff, support without which we would never have made it through.

Supporting our mission is our three objectives of awareness, support and education.